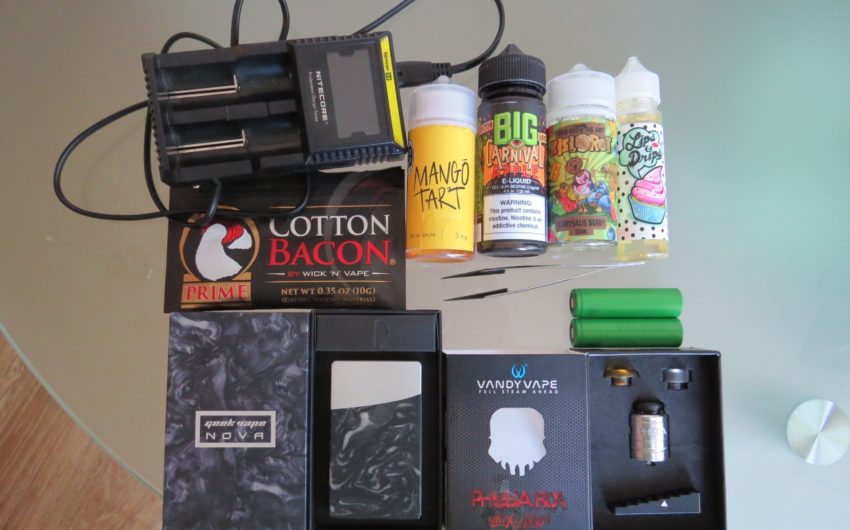 Defined by the Oxford dictionary ; vaping is act of inhaling and exhaling the vapor produced by an electronic cigarette or similar device. By heating the eliquid to create vapor, the user can get a nicotine hit without smoking a traditional cigarette. Buy Vapes Online

ANATOMY OF AN E-CIGARETTE

After e-cigarettes were initially invented, more and more people who were attracted by the potential benefits of the device began experimenting with it. The result is a burgeoning vape industry filled with hundreds of customizable options for each and every unique user. Navigating these different options can be difficult for a new vaper, so we’ve included a brief breakdown of common e-cig parts.

Batteries are the powerhouse behind the e-cigarette: they provide the energy to heat and vaporize the eliquid or ejuice. Batteries are built into smaller e-cigarettes, especially the ones that resemble traditional cigarettes, and are replaceable and rechargeable in bigger more advanced vaping devices. The size of the battery controls the length of time your vape will last, with larger batteries allowing a longer uninterrupted vape. Rechargeable lithium batteries are typically charged by USB wires or outlets.

Batteries supply power to the atomizer: the part of the e-cigarette that houses the heating coil and and wick. Although in simpler models, the atomizer can be found within the tank itself, advanced vapers can choose from stand-alone atomizers, RDAs, and RBAs, making it important component in the vape device. Since the atomizer contains the coil and wick, it houses the transformation of the eliquid into a vapor.

A wick carries the eliquid from the tank to the coil to be heated. Wicks can be made of cotton, twisted silica cords, ceramic, steel mesh, or eko-wool. Coils are small pieces of resistance wire that resemble springs. The number of wraps and diameter of the coil affects the coil’s resistance (as per Ohm’s law); the resistance determines the amount of electricity necessary to power the e-cigarette and the amount of heat it produces. Most vape coils are made of Kanthal, NiChrome, and more recently, Nickel.

Cartomizers, clearomizers, and cartridges are considered subsets of the broad category of Tanks, which are any mechanisms that hold ejuices. However, in the vape world, tanks refer specifically to advanced storage containers with special features and capacities.

Cartomizers and clearomizers are both very similar–both unscrew from the main device when you want to refill the tank. Clearomizers have a clear plastic pane that allows you to see the amount of ejuice left in your tank. Additionally, clearomizers use silica wicks to transport eliquids to the coil and are easy to clean and maintain. Cartomizers on the other hand have no plastic pane, use a polyfill substance to transport eliquid, are hard to maintain, and need to be primed before use.

Eliquids, also known as ejuices, are stored in the tanks until they are heated in the atomizer. Unless you buy a disposable e-cigarette, eliquids are sold separately from the vaporizer in small bottles. They come in a variety of different flavors, strengths and types; the main ingredients usually consist of PG, VG, food flavoring, and nicotine.

PG, also known as propylene glycol, is a common additive and preservative in foods and plastics. For vapers, PG provides more of a throat hit than VG eliquids. Although it provides a more intense flavor, PG is thinner and produces less vapor than VG eliquids. However, while the preservative qualities of PG extend juice life, some vapers are sensitive or even allergic to it.

For vapers with PG sensitivity, manufacturers offer VG, or vegetable glycerin, eliquids. VG eliquid is thicker and sweeter than PG, and often makes denser clouds and thicker vapor. Although it is known to affect the taste of the vapor slightly, it is 100% hypoallergenic making it the ideal option for some vapers. Most eliquids use a combination of PG and VG in order to produce a different vape experience.

True to its name, the Cig-a-like resembles a traditional cigarette. It’s sleek and slender construction makes it portable and easy to use. Most disposable e-cigarettes fall under this category. Typically, Cig-a-likes only have two distinct parts: cartridges and a combined atomizer and battery. These are perfect for initial vaping experiences, but soon become expensive to replace.

Vape pens are bulkier than cig-a-likes and come in three parts: a combined atomizer and battery, clearomizer, and mouthpiece. Since it is reusable it is extremely cost effective and delivers great performance, style, and taste. These are perfect for intermediate vapers who have a little experience with e-cigarette products and terminology. The best thing is, all the eliquids we carry can be used in just about any vape pen.

Box Mods and APVs, or advanced personal vaporizers, contain bigger batteries and coils. This means that they can produce larger amounts of vapor for a longer amount of time. It comes with a standard clearomizer, atomizer, battery, and mouthpiece, and provides an enhanced hit for more experienced vapers. Since these contain more components and customizable pieces, only advanced vapers should consider purchasing box mods and APVs.

While e-cigarettes are much safer than traditional cigarettes, precautions do need to be taken to ensure a quality vape experience. Make sure to use the charger explicitly created for battery, and remove the battery as soon as it reaches full charge. Keep batteries separated from one another so terminals do not touch each other and short circuit. Finally, check that batteries are rated for the specific coil and keep them out of extreme heat.

Store eliquids in cool, dark places where pets and children cannot reach them. Never ingest or lick the eliquid, and call poison control if the ejuice is on the body for an extended amount of time. Be aware of PG allergies, and make sure to switch to VG if you notice any complications after vaping. As always consult your doctor before and during vaping if you have any concerns.

Here are a few more terms you may run across on your vape journey.

26650 – The largest-sized battery used in e-cigs and personal vapes, favored by sub-ohm vapers, typically used with atomizers packing less than 1 ohm of resistance

306 – An atomizer you can dispose of, typically very low resistance, known for the ability to increase vapor

901 – Atomizers with a female thread

AFC – This stands for air flow control. Found in atomizers and clearomizers/tanks to alter the drag (dial or screw shaped)

Airflow – Amount of air sucked in by vaper

Atomizer – The area that holds the coil and wick, which is heated to produce vapor

Box Mod – APV in the shape of a box, available in either mechanical or variable order

Bridge – Are where e-liquid is located in atomizer

Cloud Chasing: The act of exhaling large, voluminous clouds. This sometimes occurs at competitions hosted at vaping events and shops. You can find some of the best e-liquids for cloud production on eLiquid.com

Drip Well – Space near the connector that catches dripping e-juice

Filler Material – Used inside of cartomizers and cartridges, it absorbs and holds the e-juice, which then makes it’s way to the atomizer for heating

LR (Low Resistance) – Low ohm rating, products a large amount of vapor, but the battery burns out much more quickly

Manual – Pressing a button to produce vapor rather than simply inhaling

Mechanical Mod – Foregoing wires or regulating chips, this mech PV has a metal tube with a manual switch to complete the circuit

mg – This stands for milligram strength per milliliter. Determines how much nicotine is in the juice

Propylene Glycol (PG) – One of the two ingredients used in juices, used in everyday food products

RDAs: Also known as rebuildable dripping atomizer. This is a modified atomizer that is not connected to a tank. Instead the vaper refills by adding a few drops of eLiquid directly onto the heating technology. It is more difficult to refill these atomizers, but some believe it delivers a more concentrated taste.

Rebuildables – Users are able to build coils and wicks for themselves using these atomizers or tanks. You can change out wicks, alter resistance and customize your vape easier with rebuildables

Resistance – The build of the coil determine how much resistance in a vape, which is measured in ohms

Silica – Often used as a material for wicks

Starter Kit – This is the beginner’s guide to vaping, bundled together to make the beginning of your vaping journey smoother: usually includes an e-cig, an atomizer, and a charger, with supplementary cartridges.

Vaper – Someone who uses vapes/e-cigarettes

Voltage Drop – A reduction in power

Wick – Can be created from silica, stainless steel mesh, organic cotton and ceramic. This carries the e-juice and ensures the e-liquid is heated without leaks